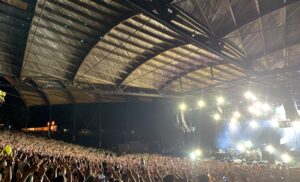 Something occurred to me during a jam — as things often do — at the last night of Phish’s Alpine Valley run in Wisconsin in the summer of 2019. This wasn’t a new thought, but the near-40-minute “Ruby Waves” jam made it more reasoned and it made even more sense than before. With old songs, particularly “jam vehicles,” the Phish hive mind (band-plus-audience) year-after-year create new memories from old songs. The improvisational aesthetic of Phish — when all four band members practice the “Yes, and…” rule-of-thumb in improvisation and use the tools and skills they’ve been honing for nearly four decades — positions them as co-songwriters of each jam. And that jam creates a story (or memory) for each fan in the audience who really feels it. With the “Ruby Waves” jam, which was sandwiched in between a song they’d only just started performing, the reverse (is it reversed?) happens: a memory from a new song is formed. And the cycle of going to see Phish continues. Fans always want more.

There’s more to this: desiderium and anemoia.

When you have desiderium, you feel a sense of longing or grief for an earlier time in your life, or a loss of feelings you once felt. This can be good or bad, in the context of a relationship, where you lived, a place in nature or a city, what you were doing, or who you were with. Nothing elicits these feelings more than music. And for a Gen-Xer like me, songs like “Everybody Wants To Rule The World,” “The Boys Of Summer,” or “In Your Eyes” all prompt feelings of what once was: namely innocence. For a Phish fan like me, songs like “The Lizards” — one of my favorites that perfectly combines the orchestrated with the emotive — conjures up memories of my first show at Sugarbush, Vermont in 1994. Are they painful memories? Of course not. But it’s painful that the time is gone. And you rage that the years are lost. Trey Anastasio remarked in the Between Me And My Mind film that a lot of his Phish and solo music originates from feelings of rage.

The desiderium is strong in lyric-less jams, especially when Phish plays them, because the band’s history relies so heavily on community and friendships that you can often tie these emotions to time well spent with others — your friends, your dog, or family. Another tearjerker is the closing section of “The Squirming Coil,” in which three notes played successively can invigorate your entire body with feelings of nostalgia. It’s felt in other music, like the guitar solo in Van Halen’s “5150,” the anthemic ending of Genesis’ “The Cinema Show,” or the end of the Grateful Dead’s “Mississippi Half-Step Uptown Toodeloo” and its exquisite coda of “across the Rio Grand-eo, across the lazy river.” You don’t know what the Rio Grande means to you in your life, but Jerry makes you feel something.

This brings me to anemoia.

Anemoia is when you experience nostalgia for a time you’ve never known. And speaking of the Dead, no place does this for me more than San Francisco. When I travel there — for work, to visit friends, or to see Phish — I follow the same routine: a visit to Haight-Ashbury, a walk through the entire length of Golden Gate Park, a sojourn north through the hills of the Presidio to Baker Beach near the Golden Gate Bridge, and then south across town to the Mission. All of this to breathe in what once was: in music, progressivism, and revolution.

I jumped on the bus as a Deadhead when the band was in their final era — attending only 11 shows — but the history, legacy, and music has touched me in so many ways that the desire to time travel back to a time and place where I should have come of age (the Haight in the 1960s) becomes so powerful when I listen to the their music and when I visit the Bay Area. I say “should have come of age” because the musical anemoia triggers a sense of longing in me for my alternate origin story: a hippie who lived in San Francisco in the 1960s. But that just wasn’t the case.

The Portuguese call desiderium “saudade” and writer Francisco Manuel de Mello wrote that it’s “a pleasure you suffer, an ailment you enjoy.” Defined, “saudade describes the lingering losses from the past, whether they be people left behind or times of our lives that we are loath to forget, and the bittersweet pleasure of those memories. It describes a thousand nuances of the same state of being.” That last line is gorgeous and describes an alternate version of déjà vu — one that is at most times indescribable. And universal.

Last month on SiriusXM’s U2 X-Radio Desire show, I recounted what it was like to experience the band’s The Joshua Tree reimagined for the album’s 30th anniversary tour in 2017. Suddenly, U2’s most visually inducing album actually had visuals. A story rooted in Americana, a discovery of the pain and joy of what it means to be an American — but from an Irish perspective. The technology and cinematic experience on this tour breathed life into an old work of art and gave the album a richer narrative. New memories of old songs. I will describe these similar feelings relating to Phish during my upcoming Crowd Control episode on SiriusXM’s Phish Radio.

In my life with Phish, desiderium and anemoia coexist. With jams, Phish create songs within songs, and new memories within memories. So, while my longing for feelings of years passed certainly exists when I go see Phish live multiple times every year — experienced with close friends coming from near and far, from Sugarbush to Red Rocks to The Clifford Ball to Big Cypress to Las Vegas to Mexico — it cancels out the the longing I may have for a time with Phish I never knew. The memories are ongoing and in real-time. The constant cycle of keeping fans clamoring for more is a healthy one — of capitalism, sure, but also for keeping a friendly, passionate, and charitable community thriving. If anything, the anemoia for Phish exists for those early days in Vermont during the germination of the band and their scene, which grew out of an extension of Northeast underground bohemian values that decried anything corporate in music those days (see: the birth of MTV). Growing up in New York, and then New Jersey, and then living for many years throughout New England — the yearning for Vermont, the surrounding mountains, and its people is strong when engaging with Phish.

I had the urge to write about this the very day I returned from Alpine Valley, but the constant cycle of longing permeated. The next jam that elicited a nostalgic response this heightened was the “Tweezer” at Madison Square Garden in New York City five months later. What happened was a normal occurrence, a new jam in an old song, but when Trey, Mike, Page, and Fish hit all the marks and the audience was enveloped in their journey of sound, it became cemented as a top memorable moment in Phish history.

The pandemic has intensified these sensations of longing and nostalgia. With The Beacon Jams, Trey only scratched the surface of reimagining his music to make new memories — and the power of the Phish community coming together to raise money for the greater good. What we haven’t talked much about is why The Beacon Jams happened — and do we really want to remember the why? I choose to remember the how-it-happened and what-it-did. And for the hundreds of thousands we’ve lost in the process during this very difficult time, perhaps music will be a touchpoint not only of sorrow, but of remembrance. When we get back to raging with Phish again, our post-trauma will ease away as we create new memories from old songs — and new ones.