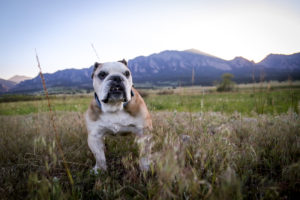 Bagel’s formative years were spent in the Portland, Maine region surrounded by forests, lakes, mountains, rivers, and beaches where he learned to hike, run, jump, and swim — all while loving anyone who would give him attention. The long and cold Maine winters proved to be a perfect climate for Bagel, who typically exerted more energy when snow was on the ground. Like most Bulldogs, he slowed down in the warmer months and preferred a couch and air conditioning over the heat and humidity. Regardless, he was equal parts athlete and motionless potato.

Bagel moved to Longmont, Colorado with his dad, Josh, in early 2013. The change in altitude, easy access to the Rocky Mountains, and overall dryness of the area agreed with the fine beast. The sun on the plains can be brutal, even in the spring, but this time the humidity was nonexistent. Every night is a cool one and they made twilight walks on Flagstaff Mountain or around the Boulder Reservoir some of Bagel’s favorite activities.

In typical Bulldog fashion, Bagel loved when people noticed him. If you didn’t, he’d be sure to let you know he’s there: perhaps with a nibble on your shoes, a jump on your legs, or barking until you scratched his ears or rear end. He loved to sleep and stretch out — on the couch, under the desk, over the carpet, or in bed. Bagel had the astonishing ability to claw his way underneath the covers to tuck himself in at night. When outside on the grass, Bagel would stretch out on his back, feet up and body wiggling side to side. If there’s a slope, these wiggle movements will force his body downward. This is called “lawn luge.”

Bagel followed a mostly vegan diet of Solid Gold organic dry food complimented by raw spinach, kale, and coconut oil. To prevent rapid eating, Bagel used a special dish containing four sections to separate the food, which slowed him down. His favorite snacks included celery, carrots, Brussels sprouts, asparagus, apples, and bananas. Bagel was in perfect health until the very end and had exquisite dental hygiene for a Bulldog who lived nearly 13 years; this is in large part owed to the vast amounts of chewing on toys he did in his spare time.

Bagel loved his life of adventure and mischief. He traveled with his dad through life’s greatest challenges, moved across the country, and went to and saw places most Bulldogs don’t get to experience: Telluride, the White Sands, Las Vegas, the south side of Chicago, Acadia National Park, the Arches of Utah, the Brooklyn Bridge, the Grand Canyon, and more. He got to relax and spend lots of time with his dad, who worked from home mostly every day. Bagel was loved and admired by many, truly spoiled, lived in the moment, and savored life’s simplest pleasures.

Josh misses Bagel on a daily basis, but his best friend will remain forever in his heart.

Celebrating the 30th anniversary of The Fox at a r

A little engagement thingy last weekend with my be

"The bleeding hearts and the artists / Make their

The #BlackCrowes back at Red Rocks last night, fro

A pleasurable wrap-up to the b-day weekend, thanks